PSYCHIC KILLER: How the hell did this get a PG rating? 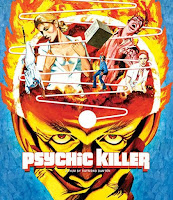 Ray Danton was a radio, film, stage, and television actor, director, and producer from the mid-1950s on through the mid-'70s when he succumbed to kidney failure in 1992. He was a natural leading man with his good looks and suave demeanor but he often played gunslingers or slick criminals. After a career of being in front of the lights, camera and audience, Danton decided to try his hand at directing and like many before and after him, he would start in the horror genre. His first was in 1972 with the little known vampire flick Deathmaster starring "Count Yorga" himself, Robert Quarry. A year later he would direct new footage for Julio Salvador's Hannah, Queen of the Vampires aka Crypt of the Living Dead. Finally in 1975 he made his last and most well known film, Psychic Killer before beginning his career directing television shows like "Quincy" and "Cagney & Lacy" on into the late 1980s.

Psychic Killer aka The Killian Effect aka The Killian Force stars veteran film and TV actor Jim Hutton (Love, American Style) as Arnold, a man who has been wrongly incarcerated in an asylum for the criminally insane for killing his mother. While in, he befriends a man with strange powers enabling him to leave his body and psychically engage others on the physical plain. Before the man kills himself, after taking revenge on his enemies, he leaves his spiritual amulet and book to Arnold who gets a surprise reprieve and is released after being found innocent. Enraged at his mother's death and seeking revenge himself, he practices the art of psychic meditation that will turn him into a Psychic Killer and one by one, he will make the people who allowed his mother to die, pay with their lives. With the help of Arnold's asylum doctor Dr. Laura Scott, the police will track down the killer and find more than they bargained for.

When this movie came out in 1975, it was rated "PG" by the Motion Picture Association of America (MPAA). How this movie received that rating is a real head scratcher. It's not overtly sexual or incredibly violent or gory but in today's climate, it would definitely get the dreaded "R" rating in theaters. Of course if it was a direct-to-video thing like a large portion of the horror output is nowadays, it could just go unrated and there is no problems at all. But Psychic Killer has a very sexy and playful nude scene featuring an inappropriately naughty nurse who does a slinky striptease before jumping in the shower, showing her ta-tas. It also has a pretty gruesome hand grinding and mutilated body on a meathook that makes you wonder what the fuck the grey-haired old geezers on the MPAA were watching. Psychic Killer is fast-paced, quirky, surprisingly funny and lots of fun. It would make a great double-feature with Roger Christian's The Sender from 1982.
Posted by Greg Baty at 1:35 PM