FIRST EVER DISC RELEASE OF THE NOTORIOUS DOCTOR BUTCHER, M.D.

Remember that jungle/cannibal/zombie/holocaust cycle from the '70s and '80s? You know; Cannibal Holocaust, The Man From Deep River, Jungle Holocaust, Cannibal Ferox, etc. Those movies were over-the-top gore and offensive as fuck but possibly the most outrageous of the them all is Marino Girolami's Zombie Holocaust aka Doctor Butcher, M.D. This one has it all; a mad scientist, cannibals AND zombies, loads of gore, sleaze and well, some pretty inept, low budget filmmaking. All of the things that make this one of my most anticipated releases of the year!

It sparked riots on 42nd Street, spawned a generation of gorehounds on VHS, and forever set an insane standard for Italian mad doctor/zombie/cannibal carnage worldwide: Ian McCulloch (ZOMBIE), Alexandra Delli Colli (THE NEW YORK RIPPER), Sherry Buchanan (TENTACLES) and Donald O’Brien (EMANUELLE AND THE LAST CANNIBALS) star in this blood orgy of gut-munching, eyeball-gouging and face-chopping originally known as ZOMBIE HOLOCAUST, which a notorious American distributor would then re-edit, re-title and re-release as a certified grindhouse masterpiece. Severin Films now presents both films fully restored for the first time ever from original vault elements discovered in Manhattan and Rome, and loaded with all-new Bonus Features that finally reveal the unbelievable truth behind its bizarre history, infamous marketing andstill-deviant legacy.

The first 5000 copies of this double disc release will come with official DOCTOR BUTCHER Barf Bag! Available from www.severin-films.com! 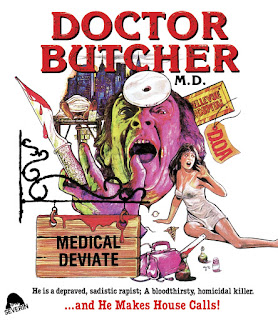 Officially, for the first time ever on disc, DOCTOR BUTCHER MD will be released UNCUT. Transferred in 2k and restored from negative elements from the Aquarius Releasing vaults and from the original negative of ZOMBIE HOLOCAUST in Rome. DOCTOR BUTCHER MD is the official US release version, with extra footage and a unique soundtrack, which was a massive hit on 42nd Street and birthed a generation of gore hounds in the early VHS era.

• Featurette: BUTCHERY & BALLYHOO: Interview with Aquarius Releasing's Terry Levene. A brand new half-hour plus career interview with the mastermind behind DOCTOR BUTCHER MD, the notorious Aquarius Releasing and their network of east coast cinemas. The 86 year old legendary showman regales us with tales of the making and marketing of movies to satiate the rabid appetites of he gore, action and sleaze crowds of the 70s and 80s.


• Featurette: DOWN ON THE DEUCE: Nostalgic Tour Of 42nd Street With Temple Of Schlock's Chris Poggiali and Filmmaker Roy Frumkes. Frumkes was the producer and star of the unfinished zombie short which features in DOCTOR BUTCHER MD. He and 42nd Street theater and cult movie historian Chris Poggiali took a recent stroll along what used to be the street which housed the world's most disreputable cinemas, pointing out each location and its lurid details. Original footage and stills from that bygone era are contrasted to the Disneyfied corporate hub it has become.

• Roy Frumkes' Segment Of Unfinished Anthology Film TALES THAT WILL TEAR YOUR HEART OUT: Frumkes' footage of his episode of the doomed anthology film, accompanied by his audio commentary.

• Featurette: THE BUTCHER MOBILE: Interview with Gore Gazette Editor & Butcher Mobile Barker Rick Sullivan. A rare on-camera interview with the reclusive Sullivan about the rise and fall of his infamous 'zine and the outrageous story behind the New York street marketing of DOCTOR BUTCHER MD.

• Featurette: CUTTING DOCTOR BUTCHER: Interview with Editor Jim Markovic. The former Aquarius Releasing employee (then soon-to- be filmmaker) reminisces about his days working for the one and only Terry Levene and his assembling of the DOCTOR BUTCHER MD cut.

• Illustrated Essay: "Experiments With A Male Caucasian Brain (...and other memories of 42nd Street)" By Gary Hertz. The Doctor from the Butcher Mobile recalls his days on the Deuce. 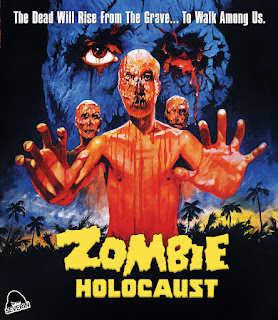 For the first time ever the UNCUT VERSION of ZOMBIE HOLOCAUST in HD. Previous releases of ZOMBIE HOLOCAUST have excised a 5 minute sequence from the middle of the movie and only included it as an inferior quality deleted scene. This sequence has now been restored into the movie, transferred from the original 16mm negative, as it was originally released. In addition, previous disc releases have used video generated titles which have now been restored from the original film source. Also a new color correction pass and further restoration have been undertaken, making this the definitive release to date of ZOMBIE HOLOCAUST.

• Featurette: BLOOD OF THE ZOMBIES: Interview With FX Master Rosario Prestopino. The FX wizard behind the carnage in DEMONS, CITY OF THE LIVING DEAD and BURIAL GROUND sadly passed away in 2008. Fortunately for fans, Freak-O- Rama Productions shot this previously unseen interview with the man about his work on ZOMBIE HOLOCAUST in 2007.

• Featurette: FILMMAKER ENZO G. CASTELLARI REMEMBERS HIS FATHER DIRECTOR MARINO GIROLAMI: It's not a well known fact that ZOMBIE HOLOCAUST helmer "Frank Martin”, aka veteran director Marino Girolami, is the father of 70s/80s action maestro Enzo G. Castellari of INGLORIOUS BASTARDS, HIGH CRIME, BRONX WARRIORS and KEOMA fame. Castellari recently took the time to reminisce about his father via skype and supplied rare stills from his personal archive with which to illustrate the chat.

• Featurette: New York Filming Locations Then Vs. Now. A look at the Big Apple locales as they are today.

• Audio Bonus: Ian McCulloch Sings "Down By The River". Back in 1964 McCulloch cut a folk music single early in his career. It's included here visually enhanced by stills from his personal archive.

• Trailers: The International and German Trailers for ZOMBIE HOLOCAUST.
Posted by Greg Baty at 1:39 PM