Ever since Eli Roth burst onto the horror scene in 2002 with his fun, gory, disease-ridden film Cabin Fever, Roth has been rather polarizing. You either love his straight forward, gory fan-boy homages or you think he needs to grow up and leave his fraternity bros behind. Either way, for the last 15 years or so, he has been all over the scene; directing, acting and producing. He even has his own show on Netflix entitled Hemlock Grove. You can't deny his panache and willingness to wear his love of horror and exploitation on his bloody sleeve. Even though his last directorial outing, The Green Inferno (review link), was pretty terrible, maybe Roth could bounce back with someone else behind the camera.

Enter first time feature film director Jon Watts. Watts has been in the business since the early 2000s, working mostly in television and for the Onion News Network. But in 2010, he directed his fifth short film, which is a fake trailer for a film called Clown (trailer link). The 1:17 second trailer is succinct, slick and terrifying. The premise is simple yet brilliant; a clown cancels at the last minute for his son's birthday party so dad finds a clown suit in a dusty old attic and dons it for the festivities only to find out later that the costume and make-up won't come off. The suit then begins to change the father into something sinister and evil right before his family's eyes. Boy, that would make a great actual movie, wouldn't it, Mr. Roth? 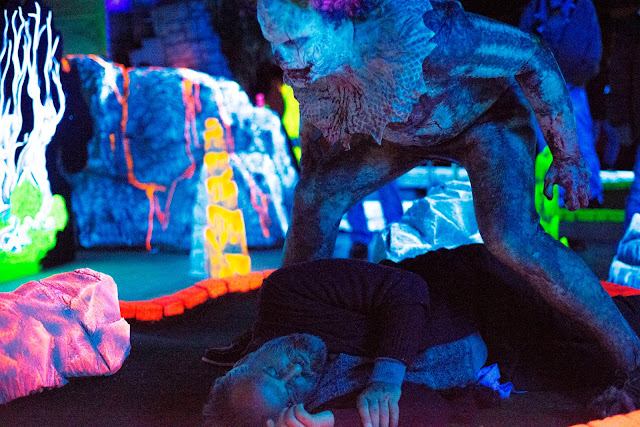 The translation from fictitious trailer to real-life feature film was surprisingly good. The movie doesn't beat around the bush and gets going with the terror pretty much from the beginning. The mood and tension from the opening scene sets the table for what is a fast-paced, horrific, carnival ride of a horror film. The only thing it suffers from is the plot template that nearly every horror movie subscribes to; set up, bloody killings, showdown with killer. I'm okay with that though since everything else was relatively original and pretty gory for a "mainstream" offering. Television actor Andy Powers plays the titular character and goes from everyday dad to demonic, child-eating clown with great aplomb. He's fucking terrifying in the transitional scenes where he begins to realize that the entity inside him wants to slaughter and eat kids.

The man's change from loving father to ancient evil isn't just physical; the mental toll it takes on him is pretty grim and shocking. He will do just about anything to get the suit off. He starts small with a box cutter and when that doesn't work he tries a jigsaw in a scene that had my stomach in knots. But the fun doesn't stop there, he also tries a dual circular saw decapitation in another asshole puckering scene. And in what may have been my favorite scene in the whole movie, he shoots himself in the head revealing rainbow-colored brain matter all over the wall behind him. It's touches like that which make me love this movie. Lastly, in what may be the most offensively horrific scene in a movie in a long time, the clown ends up at a child's indoor playground and slaughters a bunch of small kids in those hamster tubes that connect the slides and ball pits.

Two years after Clown was finished, it is finally being released on blu-ray and DVD here in the United States after a very small theatrical run earlier this year. Pick up your copy this Tuesday, August 23rd, from Dimension Films and Anchor Bay Entertainment!
Posted by Greg Baty at 12:19 PM