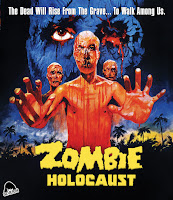 You may not know Italian director Marino Girolamo (aka Frank Martin) by name but if you are a fan of Euro/Italian horror or exploitation from the '80s, you probably know his most well known film, Zombie Holocaust. If you grew up in the U.S. in the '80s you may also know it by its "Americanized" title, Doctor Butcher M.D. Released in Europe in 1980, it didn't make it to the States until '82 at which point it was re-cut and reedited to change the pacing and mood with added scenes of zombie attacks (from other movies), the dead rising from the grave and a new harsh synthesizer score replacing the more typical, "softcore" Italian music. With those changes and a thorough ad campaign, including a "Butcher Mobile" driving the streets of New York City giving out barf bags, Girolamo's film became a hit.

The plot of both cuts takes a lot of cues from Fulci's Zombie which was already a bonafide hit as well as tropes created by zombie and cannibal flicks that came before. Someone is mutilating dead bodies and stealing and sometimes eating the organs from a Manhattan hospital. The doctors notice a strange marking on the bodies and track the symbol to a cannibal tribe somewhere on some jungle island somewhere. So of course a hot female doctor and a team of people go there to investigate and meet Dr. Obrero who is well known in the area. It isn't long before the team encounters the savage cannibals but SURPRISE!, the tribesmen are frightened away by zombies who appear out of nowhere. Then yadda-yadda, we find out that Dr. Obrero (or Dr. Butcher if you wish) is creating these zombies through terrible brain transplant experiments. Zombies vs. cannibals, the end.

The story is kind of a mess and really only makes sense on a basic level, but that doesn't stop Zombie Holocaust from being one hell of a splatter-iffic good time. This is one of the few places you will get to see a zombie's face get obliterated by an outboard boat motor! Besides the obvious Zombie references, there is a scene taken almost directly from the Sergio Martino classic The Mountain of the Cannibal God starring the stunning Ursula Andress. To be fair though, I think beautiful, painted naked women being sacrificed by natives should be in every movie. But I digress, this is a terrible production with too many flaws to point out but it definitely gives it charm that the self-aware "homages" don't have nowadays. Brain reversal transplants, loads of gut munching, savages vs. the undead, a cannibal running around with Ace Frehley face paint and so much more!

Zombie Holocaust was released on DVD by Shriek Show in 2002 and blu-ray in 2011 and aside from just having a legit release of this infamous Italian gore-fest, no one was raving about these disks. Neither of them was very impressive in the audio/video department and the high-definition transfer in particular was a mess of digital noise reduction (DNR) flattened dullness. Thankfully the good people at Severin Films got their hands on it and gave it the definitive treatment complete with both cuts of the film, a gorgeous new transfer and a boatload of new extras. Yes, there is the occasional scratch and some debris present, along with a couple of scenes that look worse than others (the opening of the Dr. Butcher cut in particular, that's from a whole different movie), but what can you expect with a movie with a history like this? The original film grain is present giving this release lots of detail lost in earlier incarnations and the colors look a lot more natural.

In short, this release of Marino Girolamo's Zombie Holocaust and Doctor Butcher M.D. is phenomenal and already in the contention for Release of the Year. Severin has been knocking it out of the park with their 2-disk editions of obscure but beloved exploitation and horror titles and this one is a game winning grand slam.
Posted by Greg Baty at 10:48 AM