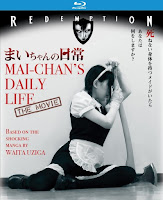 Mai-Chan's Daily Life or Mai-chan no Nichijō, as it is known in its native Japan, is a "ero guro" form of manga by writer and illustrator Waita Uziga, released as a collected edition in 2004. Ero guro is a Japanese combination of the English words for "erotic" and "grotesque". The genre started in 1930 and focuses on eroticism, sexual corruption, and decadence. From the wiki, "the 'grotesqueness' implied in the term refers to things that are malformed, unnatural, or horrific. Items that are pornographic and bloody are not necessarily ero guro, and ero guro is not necessarily pornographic or bloody. The term is often used incorrectly by western audiences to mean "gore"—depictions of horror, blood, and guts."

Upon hearing about the movie version of the original manga, I figured I should probably check out the book as a reference point for this article. I have never read anything considered ero guro and wow, was I in for a shock. The depth of depravity, gore and graphic depictions of atrocities is without equal. It's so over the top (an overused phrase, but appropriate here) that it becomes almost ineffective but it is still entertaining to see what people can come up with to offend and arouse.

The basic storyline of the series is a young woman who cannot die and can regenerate from EVERY wound is the maid and slave of a cruel mistress who hires her out to immoral and sadistically inhuman customers who are allowed to do ANYTHING to her. Each chapter is basically different customers doing terrible things to this sweet, kind, immortal woman who is completely subservient. Disembowelments, dismemberments, rapes (before and after), a fetus split in two then fucked and the one thing that got to me; Mai's stomach is open with her guts hanging out and a chicken carcass is placed in the cavity so that it will be inside her after she heals. This is so that the customers can eat it later... *shiver*.

Of course the movie adaptation is going to have lots of limits that the manga did not have, most of that being the absolutely insane amount of gore and hardcore penetrations (I can't really call it "sex"). There are limits to what can be done on film. The screenplay uses the same premise but follows a young woman named Miyako who is looking for a job and finds one for an maid position. That's where she meets Mai and her "employers" and the fun begins. Miyako shortly finds out about Mai's superpowers and living situation and also that it turns her on. The employers use that to get their own kicks and soon there is a very weird love affair between Miyaki and Mai.

Though not as graphic as the book, writer and director Sade Satô's representation of the spirit and feel of the manga is pretty close. That is not to say that we are not treated to some really gory, sadistic and perverted delights, because we certainly are. The camera is almost constantly leering at something and if up-skirt panty shots or sexy maid uniforms are your thing, you are in for a good time. Gore, torture, bizarre sexual fetishes, stomach fist fucking, chainsaw play and of course, fingering a healing wound. OH FUN! Oddly, the tone is light, playful and goofy a lot of the time until the violence begins and even then is seems kinda cheeky. Mai-Chan's Daily Life: The Movie is in essence just a grotesque, naughty good time for really fucked up people like me and you.
Posted by Greg Baty at 6:49 PM