Karl the Butcher is back in VIOLENT SHIT: The Movie (Review) 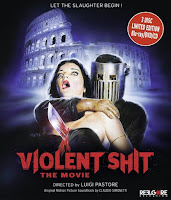 In the late-'80s underground German filmmaker Andreas Schnaas released the notorious gore flick Violent Shit, which would give birth to two equally gore-iffic sequels. The killer in that series, "Karl the Butcher" would become sort of an antihero or almost literally, a Jesus figure. With a back story grounded in reality but shrouded in the supernatural, Karl Berger (the surname given in the second movie) would live on... And now he does, in a remake in name only, this time by an Italian, Luigi Pastore. Pastore has made one other movie, a neo-giallo entitled Symphony in Blood Red, so with this "re-imagining" he gives Karl the ol' spaghetti thriller treatment... kinda.

The plot, as it were, is pretty straightforward; some gruesome murders happen around Rome, Italy and authorities welcome the help of a German detective who has a hunch that long-thought-dead German serial killer "Karl the Butcher" is to blame. There are lots of the detectives and doctors (Italian filmmakers Luigi Cozzi and Enzo G. Castellari!) standing around talking and bullshitting while the evil Professor Vassal (the incomparable Giovanni Lombardo Radice) yammers on madly about Karl's origins, something about being possessed by Attila the Hun (?!). Exposition. Exposition. Then in the last half hour, we finally get into some interesting (re: gory and sexy) stuff when a coke orgy turns into a slaughter. 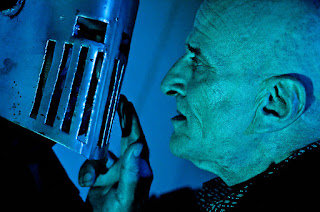 Now, the reason I began this review with the Wiki on "giallo" is because Violent Shit: The Movie is being marketed as such, basically because it is set in Italy, directed by an Italian and the soundtrack is by Mr. Goblin himself, Claudio Simonetti. There is no black-gloved killer, there is no mystery of who the killer is, there is really no "style over substance" to be had, no garish use of colors, nothing to give it the feeling or look of a classic giallo. What we have is a slicker, yet way more boring remake of something that didn't need to be remade. All the original needs is a legit re-release so that we can all enjoy the filthy, underground, gory German sleaze.

Until the last third of the movie, most of the violence is off-screen and there is only some gory aftermath at the crime scenes. Most of the movie is talking and talking and talking some more. The only interesting thing to me was one of the women in that last cocaine-fueled orgy scene named "Choco Late" who plays one of the naked chicks who ultimately gets hacked up but not before showing off her plump-n-yummies. This is her only acting role and it's really hard to look someone up on the Internet and stalk them when you don't know their real name... or so I've been told. Anyway, if you are a student of Italian horror and want to see familiar faces and hear familiar music, this is the homage for you.

Okay, I didn't like the movie all that much, but if you can find some entertainment or charm here, then ReelGore's release of Violent Shit: The Movie is phenomenal. For their inaugural release, Nico B.'s new label went all out with the limited edition packaging and loads of extra features. If this is any indication of the quality of their future releases, then I am excited to see what they have up next. The movie wasn't my thing, but as a collector I would be very happy to have this beautiful thing sitting on my shelf.
Posted by Greg Baty at 11:33 AM