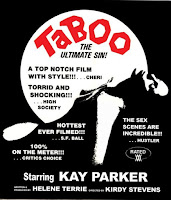 Kirdy Stevens is known for his insistence on high production values and taking a year or so to shoot one movie, which is nearly unheard of in the adult film industry. He expected a lot from his larger than average crew and shot using the best 35mm cameras. Maybe that's why Taboo became one of the highest grossing adult films of all time, even out pacing some of the mainstream movies that were released the same year. It was a monster of a movie, spawning more than twenty sequels, of which Stevens and/or Terrie only had a hand up to Taboo VII: The Wild and the Innocent. For years we as fans have wanted a beautiful, legit release of this notorious classic and finally we have one thanks to Vinegar Syndrome. 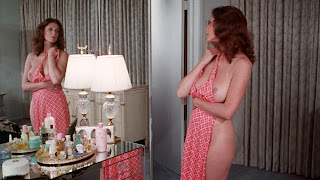 About two-thirds into the movie, we finally get THE scene; mom comes home, extremely sexually frustrated, sees her son lying naked and asleep and decides to give in to the temptation. That scene is one of the most passionate and sexy things I have ever seen in any kind of movie. The quivering anticipation of this forbidden act culminates into a mind-blowing, ball-draining climax between two people who have a deep love for one another on so many levels. Outside of the world of fantasy, this would be completely unacceptable, but in this world where your deepest, darkest fantasies are okay, this depraved, wanton act is all about intimacy and pleasure. To see this carnal classic restored with such care by Vinegar Syndrome is nothing short of amazing.

Side note: the best line of dialogue comes from the mom's nymphomaniac friend as she hears mom screaming while she is on the phone with her, "What's going on over there? Is he raping you?" She starts getting excited until she realizes she isn't being assaulted. The friend also starts rubbing her pussy when mom tells of her indiscretions with her son. "You committed incest with your son?" *rubrubrub*