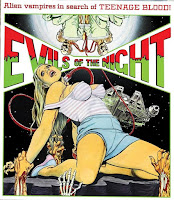 Evils of the Night opens up with the landing of an alien spacecraft in the forest of a rural college town. Cut to two separate boy/girl teen couples making out and fucking in those woods. Suddenly they are attacked by an unknown assailant; some die and some are kidnapped and taken to a hospital that has been taken over by the aliens. The space visitors are here because they need teen blood in order to ensure longer lives for themselves, but they've made two terrible mistakes; hiring two dimwitted mechanics to kidnap their prey and coming to the town on summer vacation when most of the students have left town; and the aliens are on a timetable. Will they get their required teen blood before the mothership returns or will the teens fuck themselves silly first?

How did Mardi Rustam's (real name, Mohammed Rustam) buck-nutty, genre-bending Evils of the Night get past me for so long? For his only feature film as director, Rustam went full bore with the teen nudity, goofy comedy and even some pretty good gore toward the end. Along with writing partner Philip Dennis Connors (a veteran porn writer, which explains a lot), the two crammed horror (the crazy mechanics), science fiction (the aliens) and teen sex comedy (uh, the goofy college kids fucking) into 85 minutes. Ironically, they could have done it in about 70 because there is a point about two-thirds of the way through where it drags a little. But shit, I barely noticed with all of the titties flying around and running gags like, "Shut up, Brian!" 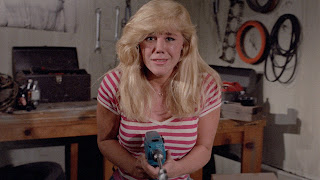 Rustam was writer and producer on Tobe Hooper's Eaten Alive a few years earlier and there he worked with the brilliantly maniacal Neville Brand who plays one of the mechanics and runs around spouting classic lines like "I'd sure like to hump on one of 'em!" The cast is full of big names from the big screen and television like Julie Newmar (Batman television show's "Catwoman"), Tina Louise ("Ginger" from Gilligan's Island) and the legendary actor John Carradine. The three of them play the aliens who are sort of inconsequential in the grand scheme of things. Most of the movie is the teens having sex and being accosted by the mechanics. If you are looking hard enough, you will also see XXX legends Jerry Butler (under his real name Paul Siederman) and Amber Lynn! The hottest babe to look out for is the blonde bombshell "Connie" played by one-time actress G.T. Taylor. *HubbaHubba* She is a mega-babe. If she was a president, she would be "Babe-raham Lincoln".

I am surprised Evils of the Night got an "R" rating back in the mid-eighties because in today's social climate all of that nudity and sexual innuendo would score it the dreaded "NC-17" or go unrated and straight to video. Despite the claim on the back cover of "some of the most grotesque special effects ever put on film" there is very little gore aside from two scenes; a cordless power drill to the tummy and an axe-chopping that goes on mostly off-camera and we see the aftermath. Most everything else is clean kills or alluded to.

In 2006 Shriek Show/Media Blasters released this gonzo horror/sci-fi/comedy on DVD with a 1.33:1 open matte with an a pretty crappy transfer with no extra features. Gorgon Video took a stab at during their comeback a couple of years ago with a pretty good looking transfer in a 1.78:1 widescreen from what looked like a theatrical print but with scant extras. Now the saviors of cinema, Vinegar Syndrome have gotten their hands on the original 35mm camera negative and remastered it to a pristine, slick shine. This version looks and sounds much better in every possible way. On top of the huge A/V upgrade, they also packed this extremely fun flick with loads of extras including a TV edit that takes out all of the fun stuff like the copious amounts of nudity. Fun for the whole family!
Posted by Greg Baty at 10:29 AM