Britt Nichols is the DAUGHTER OF DRACULA (Review) 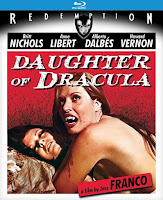 
When the nude body of a murdered woman washes onto the beach, a police inspector (Alberto Dalbés) and a reporter (Fernando Bilbao) focus their attention on the castle of Count Max Karlstein (composer Daniel White) and his niece (Britt Nichols), a beautiful woman who appears to be wrestling with an ancestral curse.

In the early 1970s, inspired by the Hammer House of Horror, Spanish horror and exploitation icon Jess Franco set out to put his own spin on Bram Stoker's monstrous bloodsucker. Sheridan LeFanu's "Carmilla", which was also the source material used for Hammer's "Karnstein Trilogy" (aka the lesbian vampire trilogy - The Vampire Lovers, Lust for a Vampire, Twins of Evil), was also a huge influence on Franco's creation Daughter of Dracula. Those films were filled with heaving breasts, nudity and surprising violence, unfortunately Franco's film doesn't live up to those classics.

Franco regular Britt Nichols (The Demons, A Virgin Among the Living Dead) plays a descendent of Count Karlstein aka "Dracula" who comes to live with her uncle in a large castle after her grandmother becomes gravely ill. Before she dies, her grammy lets her in on a little secret; she is cursed with the blood of Count Dracula running through her veins! Dead bodies turn up so of course the authorities begin to ask questions and the townspeople, including Jess Franco (in one of his patented roles of being mysterious and low key) tells them that he believes the murderer to be the one and only Dracula or at least someone related to him. 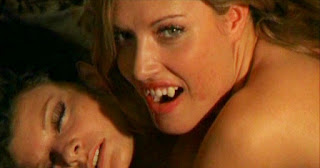 If you are expecting a Franco sleaze-fest from one of the best, you will be disappointed. If you are expecting even some hot nudity and possible lesbian vampire shit, you will also be let down. Yes, there is nudity but it's not great. The first scene is of an unattractive women in a shower that goes on for far too long until she finally gets killed. That's also kind of a theme; getting nude before getting murdered. Britt Nichols and another Franco starlet, the sultry Anne Libert have a couple of lesbian scenes but they looked almost bored doing them. I was disappointed all the way around. Even Franco's trademark direction and camerawork by José Climent was lacking.

If you are looking for hot, sexy vampire action, stick with the original Karlstein Trilogy from Hammer Films. And if you want some sleazy vampire fun from Franco and Redemption Films, go get a copy of Female Vampire starring Lina Romay. You'll thank me later.
Posted by Greg Baty at 10:34 AM