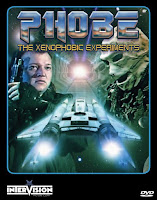 Erica Benedikty's no-budget sci-fi action flick Phobe: The Xenophobic Experiments started out as her student project that borrowed from The Terminator, Aliens and most obviously, Predator. It was about 6 minutes long and was shot on Super 8mm film. Wanting to flesh out the lead character "Dapp", a feature-length script was written making Phobe a horror and science fiction hybrid, the former to help get funding (of around $500,000) for the project. But when the investor fell through, Benedikty trimmed down some of the flashier scenes and went the community TV route and returned her movie to the originally intended sci-fi roots. With a team of volunteers, she got the movie made with an official budget of $250. Adding in the time and equipment that was donated, she estimates the actual budget at around $5k-$10k.

OFFICIAL SYNOPSIS
"When a deadly military experiment goes wrong, SGT. Gregory Dapp is called in to recover it. The Xenophobic Experiment is a newly created life-form that has been designed for war. These ultimate fighting soldiers brought victory on the Planet Mondora. One the war had ended, there was no longer a place for them on Mondora. Soon they would be banished to another planet that became a prison for these creatures. Long since forgotten, PHOBE'S began showing up, terrorizing the cities of Mondora. A special task force was created to seek out and destroy or capture these PHOBES."

Sgt. Dapp is sent through a wormhole to planet Earth to track down one of these rogue phobes by his superiors who are getting their orders from a mysterious man who wants the monster alive. When Dapp gets there, a young woman named Jennifer is being terrorized by the creature and he must save her while trying not to kill the phobe. The majority of the movie is the "Predator"-like super soldier chasing Dapp and Jennifer and having shoot-outs with laser guns and lightsabers. That's right, she also borrowed from Star Wars. At the end we get the inevitable showdown between the phobe, Dapp and his mysterious (also evil!) boss but with a little twist; (SPOILER ALERT!) the phobe is released and the "real evil" of mankind is vanquished! 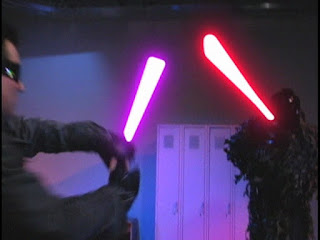 It isn't hard to realize that with the limitations of the budget that Phobe: The Xenophobic Experiments has some shortcomings. It looks cheap (duh), the acting is amateurish (dur) and the story is culled together from lots of science fiction flicks that you've already seen. All of those things are expected going in. There is lots of runtime padding with long shots of walking, stalking and "action" scenes that drag on and on. But fast-forward through some of that and you have some low-budget, cheesy fun. The monster looks great. It's a dude dressed in a camouflage outfit complete with shoulder pads and a helmet that looks like he could be one of the dudes from Daft Punk. His point-of-view shots are just like Predator, with primitive digital readout vision and he sounds like him too.

The quite epic sounding musical score is pretty awesome. It doesn't quite fit the action onscreen but that's what makes it great. The hero Dapp looks like Jerry Sags from the "Nasty Boys" of wrestling fame, right down to the wrap-around sunglasses. The hair and clothing styles are a '90s time capsule of awesome. And in my favorite scene, Dapp and Jennifer dip into a bar to hide from the monster and end up slow dancing with a live band playing in the background. Of course the phobe walks right through the front door without even getting carded! Yes, Phobe: The Xenophobic Experiments is limited and sometimes boring but it has its merits. And sometimes the story and spirits behind a movie is much more interesting than the actual movie itself.
Posted by Greg Baty at 10:17 AM