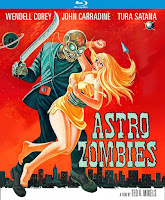 Ted V. Mikels is a name that really only hardcore horror fans know. Outside of the die-hards, Mikels has pretty much flown under the radar, probably due to his films being both very, very low budget and for the most part, pretty bad. Neither of which, especially the latter, turns me off as a lover of entertaining cinema, no matter "good", "bad" or cheap. Some of Mikel's most well known flicks stick in your brain because of the sensational and exploitative titles like Dr. Sex, The Black Klansman, The Corpse Grinders, Ten Violent Women and my favorite, Blood Orgy of the She-Devils. But if pressed to pick out the one that most people have probably heard of, it would be The Astro-Zombies or just plain Astro Zombies. I mean, if The Misfits wrote a song about it, it has to be pretty badass, right?

Recently fired from the space agency, scientist Dr. DeMarco (Carradine) and his mute sidekick Juan set out to make inhuman killers called "Astromen" from the bodies of the dead. Unfortunately the first body he has access to is a murderer, so when the body is reanimated, it goes on a killing spree. The doctor's reputation and the bodies piling up attracts the attention of not only the Central Intelligence Agency but a Chinese spy ring lead by Satana (the behootered Tura Satana) who want the secrets to Dr. DeMarco's diabolical experiments. The spies and CIA cross paths leading to espionage and international intrigue (that's something you say about spy stuff, right?) until the showdown when they all converge on the laboratory just when DeMarco and Juan are about to bring to life their second astro-zombie.

You would think that with a name like "Astro Zombies", that there would be a lot of those pesky undead killing machines running around inhumanly offing folks in very cool ways. But ultimately what you get is a spy vs. spy thing that just revolves around the monsters and their creator. A lot of the runtime is the rival factions doing things, going places and saying stuff. There is also tons of footage of the doctor in his lab fiddling with equipment and yammering on about his experiments while Juan "Igors" his way around, doing his master's bidding. There are only three murders before the final scene and they are very tame with a little H.G. Lewis-style blood paint splattered here and there. We do get a little psychedelic sexuality with go-go boots and a topless, body painted dance for entertainment. But in all, it's a pretty uneventful affair if you are looking for a horror movie.

Astro Zombies has been called one of the worst movies of all time by critics including Leonard Maltin who gave the film the lowest possible rating of "Bomb". The production values are very low (the budget was a reported $37,000 with a large portion going to John Carradine), the acting is terrible and the plot is very thin. In some scenes, including the first, it looks like they shot the nighttime scenes during the day and just turned down the brightness in post editing. I thought there was something wrong with the blu-ray. The low budget is probably why we don't get a lot of action too. It takes a lot of money for special effects. So pad the time with long scenes of dialogue, sexy women, cool looking monster masks, cheesy acting and you have yourself a Ted V. Mikels special.

Just a little over a month ago the press release came out for the blu-ray debut of Astro Zombies from Kino Lorber's "KL Studio Classics" line. This was to be only Mikel's second high-definition release of any of his movies, the other being the The Doll Squad / Mission: Killfast double-feature put out by Vinegar Syndrome. Unfortunately for fans of his, Ted V. Mikels passed away on October 16th, 2016 from complications of colon cancer, just five short days ago. Hopefully we will get some of his classic low-budget horrors like The Corpse Grinders and exploitation fun like Blood Orgy of the She-Devils soon in honor of his passing. RIP Mr. Mikels.
Posted by Greg Baty at 10:35 AM