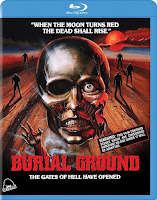 Andrea Bianchi is not the first name you think of when you think of Italian horror. Hell, he's probably not even in your Top 5. But if you just hear some of the titles of his movies, you may be a little more interested; Malabimba: The Malicious Whore, Strip Nude for Your Killer, What the Peeper Saw. Those are some Grade A sleaze titles right there and yes, they do deliver the goods in spades. Bianchi is to Euro sleaze what Ed Wood is to "bad" movies. Even though his only zombie movie Burial Ground (aka Nights of Terror) doesn't have the most sensational name, it does bring home the bacon.


IMDb Synopsis
Professor Ayres discovers a secret in an ancient stone and when he opens a crypt, he revives zombies that kill him. He had invited three couples to visit him in his manor to reveal his discovery. However, they never get around to meeting the professor. Out of the blue, the zombies attack them and they seek shelter in the mansion. The creatures put the manor under siege while they protect themselves trying to survive the horde of zombies.

If you have heard of Burial Ground, you are no doubt familiar with the child-sized man Pietro Barzocchini aka Peter Bark who plays the young boy with Oedipal feelings towards his hot-as-fuck MILF who is played by the magnificent Mariangela Giordano. Giordano was also in Bianchi's Malabimba and loads of other fantastic Italian horror sleaze epics like Satan's Babydoll and Patrick Still Lives. She plays the seductive yet somehow innocent parts perfectly. And Bark... oh Bark... he is one of the creepiest characters I have seen in a while. He is pretty obviously a diminutive man playing the part of a pre-pubescent child who just wants to suck his mommy's tits so badly. Spoiler alert, he does!

Apart from the loads of nudity and sex, Bianchi also brings the gory gut munching that we all know and love from the Italian zombie cycle of the late-70s and early-80s. There is a myriad of different looking zombies, some complete with faces full of maggots and earthworms, all of them ready to chow down on some innards. These murderous undead are pretty fucking smart to boot. They use tools like scythes (in one of the slowest beheadings you will ever see) and they scale walls like Spiderman! Nothing can keep these rotting assholes from getting up in your guts except maybe really heavy rocks. Yeah, just destroy their heads to stop them and Bianchi shows us in close-up, slow-motion detail just how it's done.

I watched Burial Ground for the first time years ago on the Shriek Show DVD and at the time I thought it looked okay for such an obscure movie. It had compression problems, looked drab and the dark scenes were too bright but okay. It wasn't until I saw this restored version from Severin Films that I realized just how shitty (and cropped) that version was. This new high-definition transfer looks fantastic. Apparently it was taken from the same elements as the 88 Films blu-ray release but improved upon slightly from the online comparisons I have seen. Along with the fantastic new picture, Severin has also packed their blu-ray with lots of extras including some interesting bonus and extended scenes that are actually entertaining. More zombies. More Nudity. And a sexy lingerie dance!

By the way, Peter Bark was 25 when he played this part. Let that sink in as you are watching Burial Ground. *SHIVER*
Posted by Greg Baty at 12:28 PM