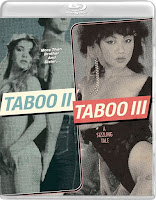 In 1980 adult film director director Kirdy Stevens and his wife/collaborating writer Helene Terrie made one of the most infamous and legendary porn movies ever; the mother and son incest-themed Taboo (REVIEW). The story centered around newly divorced Barbara (Kay Parker) and her teenage son Paul who wasn't shy about letting dear ol' mom know that he wanted to fuck her. And with legs and big natural juggs like hers, who wouldn't? Barbara is sexually frustrated and with the goading of her nymphomaniac best friend, she eventually succumbs to Paul and they have a torrid affair. So what do you do when a film like that is a success? Make sequels, of course! 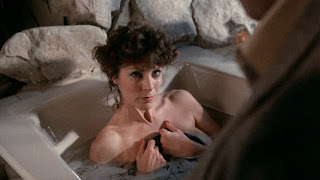 This double feature of sequels is fucking great. They look fantastic with only a few scenes with some obvious damage to the frames but nothing that takes away from the viewing experience. The sex goes from basic, everyday fucking to mind-blowingly sexy scenes of just giving in to carnal lust. The one extra on the blu-ray is an interview with Blake Palmer who plays Jerry Butler's friend "Brian" in part III. He is a pretty interesting, intelligent guy with lots of stories to tell including how legendary photographer Suze Randall talked him into getting into "fuck movies". Like the original Taboo, these two sequels are of the highest production values and look like a legit mainstream movie that just happens to have questionable acting and lots of boy private parts going into girl private parts.
Posted by Greg Baty at 12:55 PM