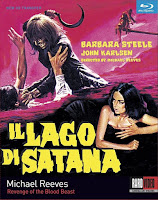 Extras: Featurette by Nocturno (a documentary on the making of the Film) / A fully illustrated booklet


Revenge of the Blood Beast stars Barbara Steele as Veronica, a British tourist who is stranded in a remote village with her husband Philip while honeymooning in Transylvania. They meet a descendent of legendary vampire-hunter Count von Helsing, who reveals that the town is haunted by a satanic curse. A mysterious car accident plunges Veronica into a nearby lake, but when her body is removed, it resembles that of the legendary "Witch of the Lake".

Reawakened from her slumber, the blister-faced hag, armed with sickle and claws, rises from the makeshift morgue and unleashes her vengeance upon the descendants of those who executed her, centuries earlier. While the bumbling Soviet authorities stumble over themselves to solve the murders, Philip join forces with von Helsing to capture the witch and put an end to the dreadful curse.

The blu-ray cover of and synopsis for Revenge of the Blood Beast aka Il Lago di Satana aka The She Beast would lead you to believe that the otherworldly sexy Miss Steele is the lead in this first feature film by director Michael Reeves. But alas I tell you that she is only on screen for maybe 10-15 minutes of the 70 minute run time. Granted, she eats up every second she is in front of the camera; wearing the grooviest couture, shooting glances with those unrealistically seductive eyes and making smoking look like the coolest thing in the world. But yeah, if you are looking for The Barbara Steele Show, look elsewhere. She is killing off in the first third of the movie and doesn't return until the last few minutes. 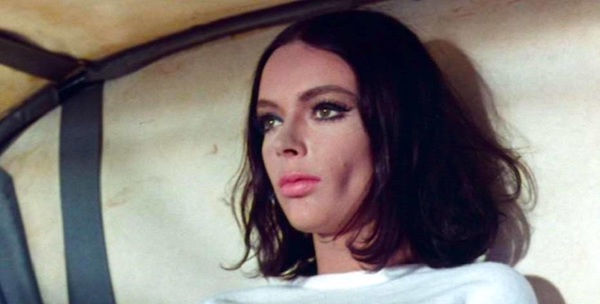 That being said, the movie isn't terrible even though it is not at all what I expected and isn't really my taste. I was expecting a satanic, gothic creature feature with some "dark humor" as the back of the blu-ray describes. What I got was a goofy, slapstick take on said creature feature starring the "Keystone Communists" (I didn't make that up although I wish I did) bumbling around trying to catch the grotesque witch who is  randomly attacking villagers. And Van Helsing and the snobbish British boyfriend who are also trying to catch the witch, though for different reasons, aren't any less silly and annoying.

Reeves' filmmaking takes every bit of creepy atmosphere of someone like Mario Bava and sheds lots of light on it (literally), bringing everything out into the open making it devoid of nearly any thrills. The only scene worth mentioning (other that the ones with Steele in them) is the opening scene where a church full of worshippers impale and murder the neighborhood witch who apparently has just killed a small child from the town. This gave me hope that I was in for a good old wicked monster flick who hides in the shadows and exacts her revenge, but nope. If you are interested in a wacky, corny 1960s horror flick with a few interesting scenes, this new Raro blu-ray with a new high definition transfer and informative booklet on the career of Michael Reeves is for you.
Posted by Greg Baty at 1:29 PM