Jess Franco Has 99 WOMEN and a Bitch Ain't One (Review) 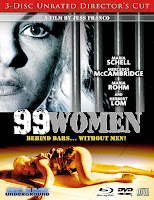 "For his epic shocker of caged women gone wild, legendary director Jess Franco brought together a once-in-a-lifetime cast of International beauties including Maria Schell, Luciana Paluzzi, Rosalba Neri and Maria Rohm. Oscar winner Mercedes McCambridge and Herbert Lom co-star as the sadistic wardens of an island prison where abused yet luscious young lovelies surrender to their own depraved desires. Behind bars... without men... experience the unchained passion of 99 WOMEN!"

The synopsis above is a bit generic but really that's all you need to know. There are subplots here and there but really, if you are watching this movie for the storyline(s), then I got nothin' for ya. This is the grandmother of what we have come to know as the stereotypical "Women In Prison" (or WIP for those in the know) film. For those not acquainted with the tried and true sub-genre, then this is what you can expect: women in prison (duh), a wicked warden (another great Franco WIP flick), sadistic guards, naked chicks, lesbian sex, rape, torture and finally, an action-filled escape to end the shenanigans. 99 Women has all of these things and the added bonus of that infamous Franco touch.

In 1968 Franco and his legendary producer Harry Alan Towers (aka Peter Warbeck) were in Brazil shooting The Girl From Rio when they found that they had some extra time on their hands. So instead of letting the crew just hang out getting paid in Rio de Janeiro, they decided to write a whole new movie over the weekend and began shooting the following Monday. By the end of the week, they had shot a third of the entire script. After putting the finishing touches on The Girl From Rio, the duo and crew hopped over to Spain to finish up 99 Women - all the while also working on the initial stages of their next film Justine. This frantic pace was nothing new to Franco and some believe it shows in the quality of his work. I for one think Jess Franco is a master of his craft who does things his own way, period.

For being released in 1969, 99 Women was a whirlwind of depravity. Loads of nudity, rape, debauchery and torture. When I look at it through eyes that have seen Franco's later, more graphic works, it seems pretty quaint. But if I really think about what is actually happening on screen instead of just expecting to see a closeup of someone's hairy butthole or saggy scrotum, I realize that this is pretty sleazy. Yes, sometimes the "rapes" are done with the dude's clothes on and yes, sometimes the "rapes" turn into a sexy "consensual" lesbian fuck-fest but the fact that these perverse people abuse their power over these subjugated women is pretty disgusting even by today's standards. Franco was always ahead of his time.

The "Director's Cut" is obviously Franco's vision but there is also a French "Hardcore Version" entitled Les Brûlantes that was released in French porn theaters five years after the original film's theatrical run. The nine explicit scenes were produced by Franco's go-to French producers Comptoir Français du Film Production and sprinkled throughout 99 Women's runtime. I don't think it is known who really shot the scenes but there are rumors that maybe Bruno Mattei may have been behind camera. Regardless, the result is haphazard at best with some of the scenes being non sequiturs and others featuring actors that are obviously not the actors who they are portraying in the original production. That isn't to say that some of them aren't interesting because they are and some of them are downright nasty in more ways than one.
Posted by Greg Baty at 1:31 PM