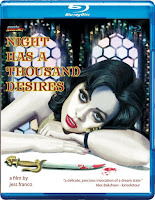 Plot summary from back cover of blu-ray:
"In this surreal and sensuous mystery/noir, Lina Romay plays Irina, a partner in a male-female mind reading act. At night she experiences vivid and sexually charged dreams which end in murder. It seems that the people whose minds she reads are being killed off one by one."

The plot summary is a little misleading in that the "dreams" aren't exactly dreams as much as they are dreamlike scenes where Romay's character is in a mind-controlled state. She is being controlled by her partner Fabian with whom she does a mind reading act. He forces her to seduce and kill seemingly random people at the fancy resort hotel where they perform. It turns out that they are all in debt to Fabian's illicit criminal affairs. Irina uses a distinct blade to murder her prey and seemingly has some sort of teleportation powers as she appears anywhere as if out of nowhere.

The mind reading and control along with her ability to apparate (you know, like in "Harry Potter") gives the whole plot a supernatural vibe. Franco's very laid back style of direction lends itself beautifully to this feeling and is one of the staples of a fully Franco-ed out film (he acted in, directed, shot and edited this film). When he is at his best, Uncle Jess can make some of the most beautiful films ever put on celluloid and Night Has a Thousand Desires fits right into that category. The soft focus, vibrant colors and languid cinematography reminds me of an elegant, high quality photography book where every page is a work of art.

There is sparse dialogue in the movie, instead the cinematographer (Franco, credited as "Joan Almirall") and actors visually tell the story along with the fantastically diverse score. Romay is at her best and most photogenic as captured by the alluringly melancholy still from which the cover of the blu-ray was taken. The score is a mix of synth keyboards, ambient noise and tribal drum beats that really transports you to a surreal frame of mind. This is Franco at his most artistic but it also has his trademark sleaze quotient of lots of naked beautiful women and wanton sex.

I'm a pretty big Jess Franco fan and before I got the press release from Mondo Macabro, I had never heard of Night Has a Thousand Desires. That doesn't make me a bad Franco fan though, the man made hundreds of movies... HUNDREDS! IMDb has him down for 203 directorial credits but I suspect it's more. I can't imagine watching this movie on a drab VHS or poorly scanned DVD and thanks to the aforementioned Mondo Macabro, I don't have to! This blu-ray's audio and video elements are absolutely exquisite. You couldn't ask for more for a movie of such visual and aural magnitude. Night Has a Thousand Desires has definitely moved into being one of my Franco favorites.
Posted by Greg Baty at 2:27 PM