They're Doing More Than "Makin' Bacon" at the ol' SLAUGHTERHOUSE (Review) 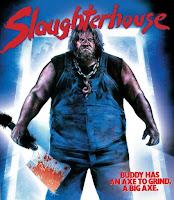 There is nothing that makes me happier than a good old-fashioned slasher flick. The onslaught (see what I did there?) of hack-n-slash horror movies in the '80s made this then 10-yr-old boy the fan he is today. When the VHS rental boom happened and I was finally into my teen years, I would comb the entire store for these movies with covers featuring a killer holding a knife or chainsaw or maybe even an axe. Yeah, sometimes these gems would be thrown in with the Thrillers (DePalma's films were notoriously here), Dramas and even Action (Maniac Cop, anyone?) but they couldn't escape me! The only way I missed one is if it was always checked out which seemed to be the case with Rick Roessler's Pig Farm Massacre aka Slaughterhouse.

The titular slaughterhouse is owned by a crotchety old hermit named Lester Bacon (really) who has refused to upgrade his farm with technology and is in danger of losing it because of back taxes. So the tax man, the competition and the sheriff are all on Bacon's hit-list and who should take them out? Well, his mentally deficient, giant, lumbering oaf of a son Buddy, who speaks in pig 'oinks' and squeals of course! Getting caught up in all of the revenge killing is a group of young people who are filming a horror movie and think that the old slaughterhouse would be the perfect location. They are right in that it is definitely a horror show in there. One by one they are picked off by Lester and Buddy until there if just one left; the ubiquitous "final girl" (whose name is "Lizzy Borden", really). 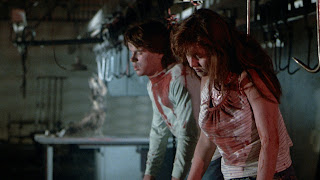 I get a special feeling in my pants when I am watching a great slasher flick. The requirements are pretty simple: a brisk pace, large body count, gory kills and an interesting killer(s). I do prefer some boobies and sexy time in there too (which Slaughterhouse does not offer) but it's not a deal breaker. The setting is pretty important too and one of the best is a rural area and/or a farm, i.e. Texas Chainsaw Massacre ('74) and Motel Hell, two of my favs. Another trait that Slaughterhouse shares with Motel Hell is it's silly yet still a little dark sense of humor. One of the best scenes in the whole movie is Buddy dressing up like the dead cop, stealing his car and tearing down the back country roads Dukes of Hazard style! I kept expecting Sheriff Roscoe P. Coltrane to come whipping out of one of the side roads to give chase.

The opening credits are of an actual slaughterhouse, putting pigs through the process with big band music playing in the background. It was both off-putting and comical at the same time. The use of radio announcements, the cinematography and even the macabre set pieces makes me think that Rick Roessler was a huge Texas Chainsaw Massacre fan. There are a couple of tracking shots that are clones of shots in Hooper's legendary masterpiece but the very obvious homage is one particular set that is a complete ripoff. Animal remains and bones are strung up to look like home decorations as the camera lingers there to heighten the tension. I don't blame them for taking inspiration from the best horror movie of all time, but it's pretty blatant.

So what kind of release would you expect for a little known yet highly sought after slasher flick from the '80s? Bare bones? A muddy DVD ripped from a VHS print? Nah, fuck that. Vinegar Syndrome ain't about that. They took this gory low-budget slash-fest and gave it the royal blu-ray restoration treatment with a shit-load of extra features, over a dozen to be exact! So not only do you get a fun, gory slasher movie complete with '80s clothes and hairstyle, dancing and Buddy with his huge hog-leg axe, but it's full of extras to nibble on. Now you don't have to look for those hard-to-find VHS and DVDs floating around out there for outrageous prices, just hit up your favorite online retailer (mine is Grindhouse Video!) or Vinegar Syndrome themselves and get your hands on this killer of a rural slasher film!
Posted by Greg Baty at 2:41 PM