Hide in the Trunk, it's a DRIVE-IN MASSACRE! (Review) 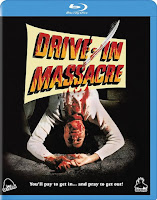 Stu Segall started his career in 1970 directing, producing and writing sexploitation and hardcore adult films. He worked with some of the greats like Rene Bond (Teen-Age Jail Bait), Marilyn Chambers (Insatiable) and even the heavily-hootered Uschi Digard (C.B. Hustlers) and directed around twenty films in that time. In the mid-eighties he went "legit" when he got a gig producing the Frank Lupo created "Hunter" television show starring ex-NFL player Fred Dryer and the gorgeous Stepfanie Kramer. He would go on to produce other shows like "Silk Stalkings" and Lorenzo Lamas' "Renegade" (also starring the lovely Kathleen Kinmont!) but stuck in between there somewhere was his lone horror movie; Drive-In Massacre.

OFFICIAL SYNOPSIS
"It was one of the few true slasher movies to pre-date HALLOWEEN and FRIDAY THE 13th, and remains the closest you'll ever come to an actual seedy 70s drive-in experience: It's a hot summer night in Southern California and the local passion pit is packed with patrons. But when a sword-wielding psycho begins carving up customers, it'll unspool a grubby cavalcade of creepy carnies, peeping perverts, graphic decapitations and an ending you have to see/hear to believe."

There may be a reason why Segall never made another horror movie; because this one isn't very good... technically. Yes, there is a sword-wielding murderer running around a grimy old drive-in movie theater lopping off heads and whatnot but there are only a few actual on-screen kills, the first of which is the most memorable because it made the cover of most of the promo material for the movie. The sleaze quotient is very low with no nudity (maybe one quick boob?), some light making out and no sex. The only things that make Drive-In Massacre an entertaining movie is nostalgia and the bizarre characters. The really angry drive-in manager, the mentally challenged janitor and the silly detectives who at one point dress in drag to catch the killer. 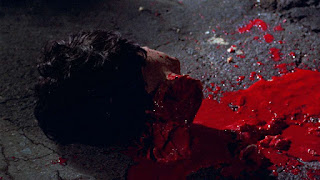 "… The senseless bloodbath that gripped a California Drive-In has spread to other theaters throughout the country. Authorities say there are no clues to the killers identity and no end to the horror in sight. The killer could strike again. Anywhere–Anytime… Who will be next—?"

Uh, right. Anywhoo... two of my favorite home video companies, Severin Films and Distribpix have teamed up to release this weirdly entertaining, grimy slasher flick on high-definition blu-ray. If you are a fan of either of these companies, you know that they put out quality products and this one is no different. This movie had a good run on VHS but never had a legit release on DVD in the United States. The bootleg (BOO! HISS!) DVDs that are available look shittier than the tapes from which they are taken. So this new transfer from the film's original camera negative looks better than you've ever seen it here in the U.S. unless you got to see it in theaters originally!
Posted by Greg Baty at 2:24 PM