EXTRAS: Liner notes from Ted Geoghegan (Screenwriter of NIKOS THE IMPALER, and Writer/Director of WE ARE STILL HERE) / A Special BONUS DVD, including the English dub version of ZOMBIE '90: EXTREME PESTILENCE, and VIOLENT SHIT 4.0: KARL THE BUTCHER VS. AXE Trailers, Behind-the-Scenes Footage, and Premiere Footage

Even in his very early years German born Andreas Schnaas loved graphic, violent movies. In 1980, at the age of 12, he and his childhood friends made a short film called "Hunted" which featured Schnaas and his buddy brutalizing and killing an elderly man, who was played by his grandfather. Schnaas' father shot the piece and would go on to be behind the camera for the next few years for his son until 1989 when Andreas scraped enough money for his first full-length feature entitled Violent Shit. Made with his buddies over the next few weekends, Violent Shit would become Germany's first direct-to-video horror film and was a big success in his home country and around the world. The movie's success spawned three sequels over the next twenty years.


The first movie in the series is not what you might expect; it doesn't feature the iconic mask that Karl wears in the sequels and it has religious imagery ala' Jodorowsky giving it more weight than the others. Child Karl is beaten by his abusive mother and subsequently chops her up with a large meat cleaver. We learn later in the movie that before the murder, Karl was visited by a demon-esque figure (who may have been his dead dad?) who told him to kill her. Twenty years later imprisoned Karl escapes and goes on a killing spree across the countryside, sometimes eating the victims. Throughout the movie, Karl's flesh slowly and inexplicably decays. Finally, in the last scene, he lies on the ground with the decomposition accelerating and pulls out a newborn baby! The end. 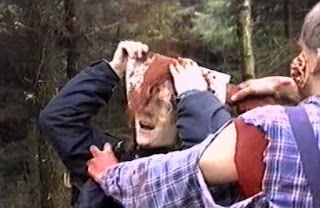 Of course with an ending like that, there HAD to be a sequel, so the baby "born" at the end was apparently Karl Jr.! So in Violent Shit II: Mother Hold My Hand, twenty years later, we find a very large Junior who has been adopted by his father's demented lover. The two have an incestuous and master/slave type of relationship. She orders him to kill and maim to avenge his father's death even though he seemed to die by his own hand. So he kills joggers, campers and even a theater full of porn-watching perverts! The movie ends with authorities finding the mother's head which had earlier given Junior the ominous warning that his father is back from the dead. Yes, this sequel was kinda slapsticky and goofy while also featuring a scene where Karl Jr. staples a woman's pussy together and more! But you know with dad being alive and Junior missing, here comes another sequel...

Oh my, Violent Shit III: Infantry of Doom (aka Zombie Doom), what the fuck? So Karl Sr. and Jr. have taken over an island and started a cult of metal helmet-wearing madmen, an army of killers. An unfortunate group of men get shipwrecked on the beach and are quickly captured by the minions. They are tied to stakes and forced to watch as the Karls dole out punishment to men in their ranks who they consider lesser or traitorous. Hooks and chains are used to rip open chest cavities, faces and even buttholes! After the fun, it is decided that the captors, as well as one of the traitors, will be set loose and hunted by the army. Throughout the hunt we encounter ninjas fighting zombies and tiny killer monsters that are literally hard plastic toys that look like, well, hard plastic toys. At the end, Senior and Junior are destroyed... yeah right.

Years after Doom, Schnaas teamed up with fellow countryman and veteran underground splatter director Timo Rose to make Violent Shit 4.0: Karl the Butcher Vs. Axe. This time, Karl makes a deal with Satan to return from Hell to a post-apocalyptic world to kill the new baddest man on the planet, Axe. When he returns, he realizes that the world has been taken over by many gangs of violent thugs who are in a constant struggle against one another. Karl finds Axe and after a little scuffle, they turn into a tag team against the gangs, just like in comic books where the heroes have to fight before they team up. SPOILER ALERT! Karl is Axe's father, Axe has a kickass sister named Vendetta and their mom is the queen of an all female gang who enslave men, pump them for sperm on which they feed! Man, this one is something.

The series is really all over the place. It is super violent and gory, often goofy, sometimes sleazy but always has some fantastic highlights. As you watch them movies in order, you can really see a difference in the budget each one had. The original Violent Shit looks and sounds fucking terrible even on this new DVD. The sequel is a bit better and even has a badass theme song. By the third entry, you can really see that they have a little money and know-how. The last movie is slick by Violent Shit standards and even features some really shitty computer generated special effects. Schnaas' second movie Zombie '90: Extreme Pestilence is also in this collection but aside from being a very cool extra feature, isn't much more than a cookie-cutter gut-munching zombie flick. For fans of German splatter and the Violent Shit movies, this collection that Synapse Films has put out is pretty fucking cool.
Posted by Greg Baty at 12:43 PM