Severin Nunsploitation Mania! DARK WATERS and THE OTHER HELL (Review) 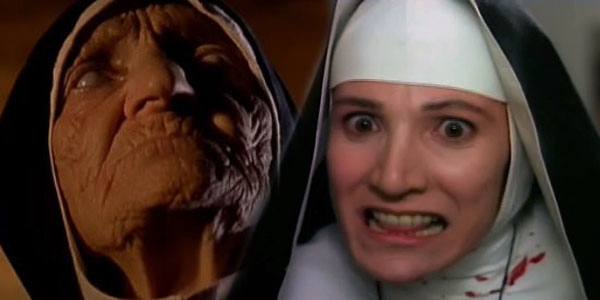 Nunsploitation is a subgenre of exploitation that focuses on well, nuns and the shenanigans the sisters get up to. The nuns are usually in a convent (natch) where there are no men save the occasional priest or investigator, demons or satanic rituals are sometimes involved and my favorite trait; blasphemous lesbianism! It's rampant in these convents, I tell ya! These supposedly uptight women on God are just bursting to dive into that no doubt unkempt righteous muff right before flagellating themselves or someone else who has been naughty.

These are some reasons why I actually almost balk at calling Mariano Baino's Dark Waters and Bruno Mattei's The Other Hell "nunsploitation" at all. They both have some of the traits but both are not nearly sleazy enough for me to throw them in with some of say Joe D'Amato and Jess Franco's nun-salacious output.

Dark Waters is by far a more well-rounded movie than The Other Hell. The story follows a young lady who travels to an island convent where her recently deceased father used to send lots of money to evaluate whether she is going to continue the charity. During her investigations she is embroiled in deep, dark secrets, murder and satanic rituals that lead back into her own past. The film begins with a dialogue free prologue that leads us 20 years later with the woman headed to the island.

Dark Waters is built on insane visuals teetering on the art house aesthetics of Jodorowski. The atmosphere and settings are the stars of the show with the story getting lost here and there with a very laborious pace in the middle third of the run time. For a while the only way to get this Lovecraftian religious horror was on an expensive out of print DVD from No Shame, but now we have a gorgeous (though faultlessly not pristine) new transfer on blu-ray from Severin films packed with the No Shame extras along with some new stuff.

Mattei's The Other Hell also relies much more on the horror aspects of nunsploitation. After a bizarre incident involving the embalming of a recently deceased nun, the convent becomes a hotbed of demonic activity and more infernal murders. Of course the church sends in a priest to investigate and that just sends the nunnery into a lustful and obviously destructive tizzy.

While Mattei decided to leave most of the sexy time for his other nunsploitation classic The True Story of the Nun of Monza starring the lovely Zora Kerova (from Cannibal Ferox fame), he did manage to stick some sleazy moments into The Other Hell like a knife to the vagina! Comparable to a lot of Italian films of the era, the elements used for Severin's new blu-ray were far from perfect. But where the Shriek Show DVD was a monumental upgrade from the VHS tapes, this new blu-ray is a welcomed improvement even from there.
Posted by Greg Baty at 2:35 PM