In 2014, Unearthed Films founder and first-time director Stephen Biro unleashed gorified hell when he relaunched the underground Japanese "Guinea Pig" series with an American flavor. The fledgling "American Guinea Pig" films started out with a blood-splattered bang with Biro's American Guinea Pig: Bouquet of Guts and Gore. He introduced the United States to some of the most visceral and graphic depictions of mutilation that have ever been filmed. The next installment to the new series was special effects guru Marcus Koch's deeply emotional and physically disturbing Bloodshock which delved into the darkness of your psyche as much as slicing into your cornea. Skipping the third film, the fourth in the series is about to be released but it has a bit of a backstory to how it became part of "American Guinea Pig".

There was another film that was planned as the third entry but something went wrong and the production was shut down and Plan B was activated. Stephen Biro decided to move up Song of Solomon in the batting order, what was supposed to be the big closer to the series. So Stephen and his team went to work shooting Solomon last year. With that film in post-production, he came across a finished film by first time director Poison Rouge who, if you know her, was an actress in the under appreciated House of Flesh Mannequins in 2009. He was so impressed with Sacrifice and realized that it was a perfect fit for the "American Guinea Pig" series, that he quickly nabbed it up and added it to the line-up, making it the fourth film in the series behind the upcoming Song of Solomon. In my humble opinion, this was a pretty brilliant move on Biro's part because this movie couldn't be more at home as part of AGP if it was made for it specifically.

The very sparse story follows Daniel, a man who has recently moved back into his parent's home after their passing. We don't really know the details but there was horrible trauma in his past as seen by a few flashbacks and the scars on his body. It's pretty clear from the beginning the Daniel wants to die and feel the most pain he can on the way. He strips down to his undies and takes a book, three candles and some archaic-looking tools into the bathroom to begin sacrificing himself to "Ishtar" who is the goddess of fertility, love, war, and sex. He has fallen in love with her and wants to "fuck her in a pool of blood". So he painstakingly follows the directions in the book, mutilating himself in increasingly gruesome ways to open the portal to another realm, the place where he can meet Ishtar and be taken away from the torment that is his life.

Sacrifice is right around an hour long which is just about perfect for a movie like this. Usually when you think about gore flicks, images of low quality production values come to mind. But Poison Rouge has created something of a slickly produced and beautifully shot film that has many layers; emotional, spiritual and of course, physical. My initial reaction was that this really wasn't my cup of tea because a lion's share of the run time is just gruesome scenes of Daniel inflicting horrific pain on himself. But after rumination on the movie as a whole, I think that Sacrifice's journey takes you to a lot more places than just crude gore scenes for their own sake. I love that a lot of the story is open to interpretation and everything is not over explained. Like Bloodshock before it, this is a gore flick for the thinking person, one with an open mind. But really, you could also take it at face value as just gore and enjoy it as well. 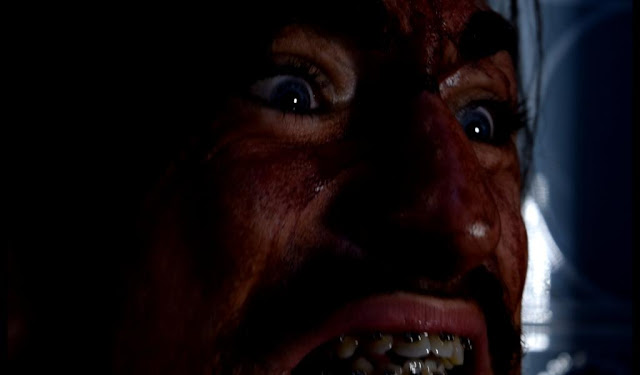 The overall special effects were pretty impressive. There are a few gore gags that didn't stand up to the up close scrutiny but in the grand scheme of things, those are small flotsam and jetsam in a very large ocean of gruesome goodness. The only pretty big critique I have for the entire production is the voice of the narrator. The actor playing "Daniel", Roberto Scorza, is obviously an Italian man with dark features but the voiceover is a very high-pitched Englishman. It is very strange and off-putting, nearly to the point of taking you out of the movie completely. Apropos of Mr. Scorza, he is amazing in the lead role; one of only two in the entire film. He has no dialogue throughout so has to convey every emotion through his body movements and facial expressions and he does so flawlessly. The only other character is "Ishtar", played by the voluptuous Flora Giannattasio, who does a great job as well.

American Guinea Pig: Sacrifice is blood and gore-soaked spiritual journey that can be hard to watch for some but will deliver the goods for all.
Posted by Greg Baty at 10:36 AM