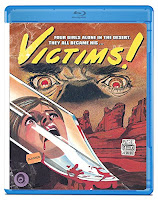 That's the tagline to Jeff Hatchcock's 1981 (not 1985 as IMDb incorrectly states) rape/revenge exploitation thriller Victims!, but it could also be the synopsis. It's pretty short on plot but long on the sleaze factor. The story, as it were, follows four hot young ladies as they head to the wilderness for a nice nature-filled weekend. On their way, they run into all kinds of creeps and perverts who ogle and harass them but nothing could prepare them for the real sadists that they encounter deep in the woods. The chicks get to their camping spot and after some frolicking and frivolity begin to feel like they're being watched. It isn't long before they find that they are right and their violent sexual nightmare begins.

Victims! is a really grimy and sleazy rape/revenge slasher that doesn't waste much time with irrelevant things like an original story or too much dialogue. Within the first two minutes there are three women brutally killed by a man in drag. What this has to do with the rest of the movie, I have no fucking clue but it's a hell of a way to open a movie. In fact, the first 15 minutes has no dialogue and it seems to be just a string of strange, unrelated scenes edited together. But once the girls are introduced, the story rolls downhill like a runaway boulder -- which is a reference to a bizarre scene in the movie. The rapists/killers are a couple of Vietnam vet buddies who spout off gems like, "You walk around half naked, not letting men touch you and then wonder why you get raped!" while doing stuff like making them munch each other's rugs at gunpoint. 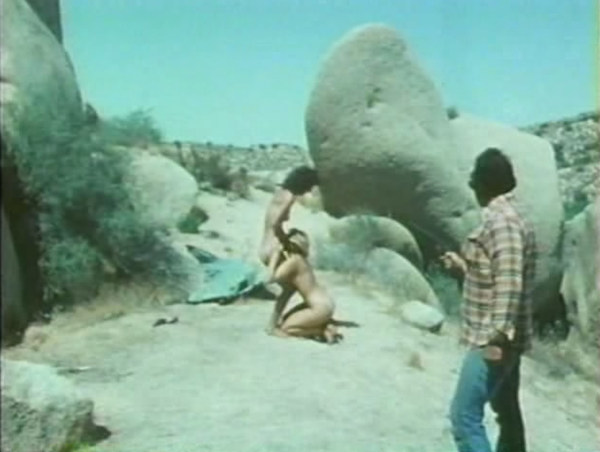 While the movie is short (76 minutes), entertaining and to the point, the blu-ray quality is pretty much shitty and unnecessary. There is a disclaimer that reads, "Victims is presented using the best available elements provided by Slasher // Video. Not sourced from an HD Master; upconverted to Blu-ray and DVD specifications", so you at least know ahead of time that the quality is going to be dubious at best. The "elements" they speak of is standard play Beta tape. The worst part is, it doesn't seem that they did any work on it at all when they transferred it to digital. It's terribly soft, bright and has very little color contrasts and what is there is smeary. Some scenes are so bad that it's hard to tell who's who.

Same with the audio. In one very important scene toward the end, one of the person's dialogue is indecipherable. In the interview with the director, he refers to having prints of the movie (which was shot on 16mm film) but couldn't be bothered to look for them apparently, which is a shame. I really like the movie and feel that sleaze hounds like myself will really dig it. I'm glad that Slasher//Video and Olive Films at least made some version available to the general public but save yourself a few bucks and buy the DVD version.
Posted by Greg Baty at 1:39 PM