Comics From the Analog Age: LASERBLAST and MANIAC Are Coming! (VHS Comics) 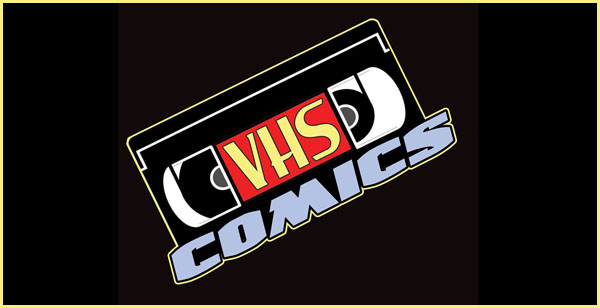 Not long ago Rotten Cotton god Shawn Lewis and master horror writer Stephen Romano co-founded Eibon Press, a comic book company specializing in high quality, limited/special edition horror, gore and shock. Their first few issues concentrated on Lucio Fulci's classics Zombie and The Gates of Hell and were nothing short of impressive. While continuing that line, they are venturing out with a new imprint called "VHS Comics" with a focus on science fiction and horror from the glory days of rental stores. "We were trying to come up with a new line of books that would honor the past, while providing the basis for some awesome, progressive storytelling", said Romano.

Their first book is going to use that "progressive storytelling" aimed at a retooling of Charles Band's schlocky Laserblast which Romano made more intense and adult, "I always saw a much darker, more terrifying ideal at the center of everything. What we’ve done is take the story of the film, and the same characters—you’ll see Kim Milford and Eddie Deezen in there, just like they were in the movie—but we’re really getting a lot deeper and more radical with it." Romano continues, "It’s also really super gory—ultraviolent, like all our other stuff. No PG rated kiddie crap here. I love writing these because it allows us some really fun creative possibilities."

While you may not be familiar with Laserblast, you will certainly recognize the grimy, sleazy second book slated to be released; Bill Lustig's Maniac! This story is going to be utterly insane, getting more into the maniac's backstory and expanding on the crazy ass nightmare sequences. Romano expounds a bit, "The opening dream sequence that begins the first comic is a real tour de force for our artist. It’s 30 panels over two pages showing exactly what Frank does, and it’s one of the darkest, most violent sequences in horror comics history!" The beloved anti-hero Frank Zito is going to be front and center in this balls-to-the-wall extravaganza.

The art for both ongoing series' is none other than the incredible Pat Carbajal who currently draws Zombie and most of the other books for Eibon Press. And like the Eibon books, this line will also be packed to the spines with lots of extras including exclusive goodies, "We wanted VHS Comics to stand out from our other releases" explains Shawn Lewis, "so what we’ve done is to manufacture special VHS boxes for the special edition issues, and each box comes inside the Eibon sleeve with all the other extras. It’s flat, but you take it out and unfold it and assemble it. It’s an actual, real VHS box you can even slip a cassette into, with special custom designed comic art done just for the box!"

Like the Eibon Press comics before, these VHS Comics releases will only be available through Eibon's website (LINK) and are limited. So don't be stupid, miss out on these awesome books and end up paying outrageous prices on the second hand market. They will be available for pre-order on October 13th, so set your calendars now!

ABOUT VHS COMICS
VHS COMICS is a new sub-imprint of Eibon Press that specializes in wild, innovative adaptations of fan favorite horror films from the ANALOG AGE OF VHS HOME VIDEO! It’s a tapehead- friendly line of books that present a nostalgic look back, while moving into the future with top-of- the-line printing, bonus articles and interviews in each issue . . . plus some amazing VHS style extras.
Posted by Greg Baty at 12:12 PM