A couple of years ago Tampa-based horror and exploitation filmmaker Sean Donohue made one of my favorite indie horror movies of all time, Death-Scort Service (REVIEW). The premise of the movie wasn't groundbreaking but Donohue took the tried and true "masked killer murders half naked chicks in gory ways" formula and did something magical; he made it with just enough playfulness to take what could have been a very mean-spirited movie and made it sexy and light while still being gory and brutal. So when Sean announced a sequel to come out this year, I was fucking stoked. And with such a sensational subtitle like "The Naked Dead", I just knew this shit was going to be dope.

The sequel basically picks up right where the original left off, with the killer dead and the "final girl" Michelle (a role reprised by the delightful Krystal "Pixie" Adams) trying to wash off (literally in the bathtub) the memories of her terrifying encounter. Flashbacks of the first movie are shown to get new viewers up to speed and give fans a refresher. We then meet a new batch of call girls who are ripe for the fucking (see what I did there?) and somehow the deranged killer from the OG Death-scort Service has risen from the dead and still wants to murder hoes. A couple of insane characters like the dirtiest old man you will ever see "Buddy" (the ubiquitous Bob Glazier and his equally omnipresent dick) come back for the festivities and new friends like "Frank the Pimp" (E8ight the Chosen One) are introduced. 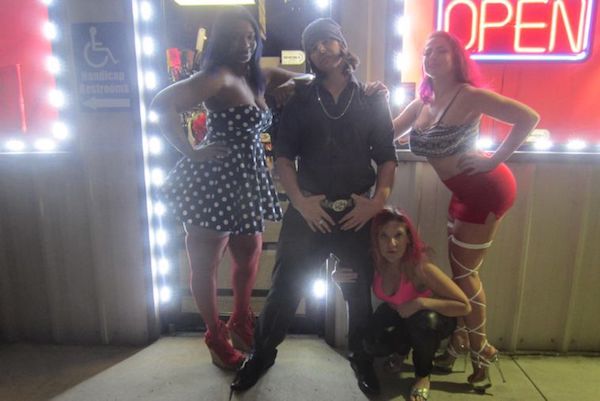 Two things that you should expect going into this sequel are: first and foremost, the nearly continuously naked or half naked chicks are the focal point and that there is one scene which is comparable or maybe even surpasses the utter carnage of the barbed-wire bat from the first movie. Naked honeys are strangled, shot, given an acid bath (the second best, most brutal and well executed kill) and one is even given an impromptu abortion with the expected avalanche of guts and grue! There aren't as many insane kills as in the first movie, but after talking to Sean, it's understandable that he didn't want to repeat anything from the original and wanted more dialogue and story in this one. That's not to say that there isn't some awesome shit here, like a hilariously long machine gun shooting that made me laugh out loud.

I didn't like this one quite as much as I did the first. I probably actually dug the original a little too much. The first thing I want to do as a reviewer, critic or just an asshole who just loves to write about movies is to compare the sequel to the original. Sometimes with indie movies, that just isn't fair and needs to be looked at from another perspective. So I tried to write this as someone who had not seen Death-scort Service. That being said, as a standalone movie Death-scort Service Part 2: The Naked Dead is exactly what I'd hoped it would be; half seedy slasher, half naked music video and all unflinching indie horror. Sean Donohue has a unique directorial vision and visual style (helped out by the cinematography of Sleaze Box's Chris Woods) that lends itself perfectly to a gritty but still very slick aesthetics of the slasher genre.

Check out the world premiere of Death-scort Service Part 2: The Naked Dead at the Tampa Bay Screams' Film Festival on August 26th along with guests Jill Whitlow (Night of the Creeps) and Camille Keaton (I Spit on Your Grave)! Get your tickets HERE!