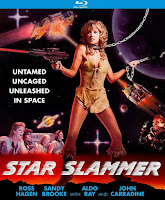 OFFICIAL SYNOPSIS
"Far into the future… a war rages on a distant, desolate planet. Taura (Sandy Brooke, Terror on Alcatraz), a voluptuous Amazonian beauty, finds herself mounting a battle against the forces of evil when she tangles with Bantor (Ross Hagen, The Hellcats), a sadistic government official. Soon she is sentenced to hard labor aboard the prison ship 'Star Slammer' and must prove herself to her young female cellmates before earning their respect and leading them in a daring prison break. With every turn, Taura faces new dangers, as she must outwit the sex-starved warden, out-tough the tyrannical trustee, and battle jagger rats, astro zombies and alien monsters. She leads her small army into a space war that will bring their salvation or their final doom."

In 1985 Fred Olen Ray rented some production space in Roger Corman's 'New Concorde Studios' on Main Street Venice, California. Inspired by Corman who used leftover sets from The Terror to make The Raven, Ray set out to make the most of the time and materials he had at his disposal. So he rented two weekends, four days, and used one of those days to film footage for his movie Biohazard. The other three days were used to shoot scenes for his women in prison in space flick Prison Ship aka Star Slammer. To save money and time, Ray recycled the monster from Douglas McKeown's The Deadly Spawn and what looks like masks of the Tusken Raiders from Star Wars but to go further, he reused footage from other films from Corman and others. 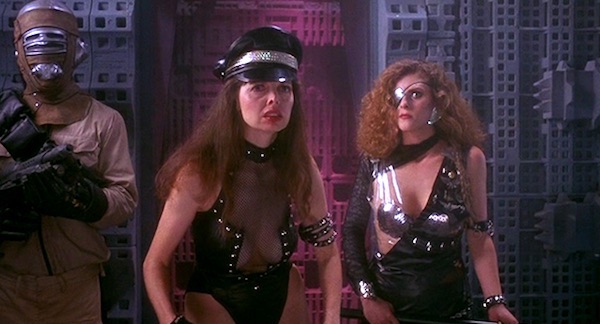 “I wanted to make this movie called Star Slammer, so I rented Roger’s studio for a couple of days using some of his old Space Raiders sets. I shot a bunch of girls in sweatpants and stuff running around with Aldo Ray. I also negotiated with Roger to use some stock footage from Battle Beyond the Stars of spaceships and stuff. They wanted $4,000 a minute. We also grabbed some Galaxy of Terror costumes”, Ray says in the wonderful book 'Crab Monsters, Teenage Cavemen and Candy Stripe Nurses – Roger Corman: King of the B Movie'. And because of shared legendary producer Jack H. Harris, it's been said that Ray also used some footage from John Carpenter's Dark Star, even though I would not have known that without reading it, so who knows if it's true. The incestual relationships of the genre movies during that time period is interesting nonetheless.

Star Slammer is exactly what you would expect from Fred Olen Ray, the man who has brought you over four decades of cheesy (Hollywood Chainsaw Hookers), sexy (Dinosaur Island) and even holiday (his Christmas series) entertainment. Slammer hits all of the women in prison tropes; nudity, lesbianism, mean guards, sexually aggressive warden and girl on girl violence. But this one has qualities that not many other WIP flicks have, like comedic elements and the fact that it's set in space, on a prison spacecraft! Fred Olen Ray also has an eye for hot chicks. Every female prisoner as well as the warden are all real hotties. The lead actress Sandy Brooke, looks a lot like Sybil Danning who, maybe coincidentally or not, was in Corman's Battle Beyond the Stars. Marya Gant who plays the warden reminded me somewhat of Lina Romay. 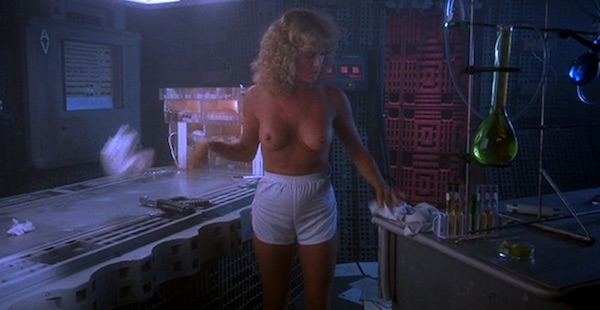 There isn't a lot of sleaze here even though there are half-dressed chicks running around through the whole movie and toplessness and a little light torture but nothing explicit. I would have loved to have seen more of Marya Gant's lovely knockers, but alas I settled for copious amounts of cleavage. Star Slammers is more a sexy, playful sci-fi romp than a down and dirty, mean spirited roughie. It's fast-paced, full of memorable scenes with lots of eye candy to look at and one liners that make you chuckle. You may even spot more rehashed footage and homages than I did, so you can make a drinking game while watching. Definitely check this out if you are a fan of Fred Olen Ray, cheesy science fiction, playful women in prison or just plain entertaining movies. Pick you your copy of Fred Olen Ray's Star Slammer on stunning high-definition blu-ray from Kino Lorber now!
Posted by Greg Baty at 12:47 PM