(DISCLAIMER: The views and opinions expressed herein are those of the author and do not necessarily reflect those of Cinesploitation or its owner.)

On December 1, 2014, fans of Ryan Nicholson’s gory cult classic Gutterballs got some HUGE news when Plotdigger Films, Nicholson’s company, launched an Indiegogo campaign that promised some massive perks including DVD and blu-ray releases for not only the follow-up film, Gutterballs 2, but this campaign was going “balls deep" and even offered a third film, Gutterballs 3. Of course this wasn’t an ordinary campaign – this was going to be MASSIVE because there were bowling pins, posters, replica masks... this was the real deal.

As of today, it has been just shy of three years since the campaign launched and so far no one has received any of the perks for which they paid. So where did it all go wrong and what is actually happening with Plotdigger Films and the release of all these movies people have been waiting for? Well, my name is Bob Ferreira, a horror filmmaker, massive Plotdigger fan and a friend of Ryan Nicholson who went from just being “a fan” to working directly for Plotdigger Films. I’d love to set a few things straight as far as I understand about all the projects sitting in production hell. 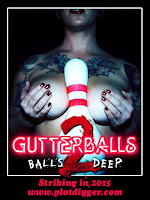 Gutterballs 2, in whatever incarnation you’d like to consider it, first screened in 2015 at Texas Frightmare to, what most people who were there will tell you, not a good response. There were walkouts, grumblings and several people who I’ve spoken to personally who were in the audience say it felt unfinished. Well, there may be a good reason for that. As of this writing Gutterballs 2, in any form, has only been seen that one time in public and has no home video release. There was a planned release of that version but apparently, like always, issues arose and it has never been released.

So instead, the ending of the film (approximately 20 minutes or so) was chopped off and released as its own stand-alone short, appropriately titled More Dead Nude Girls featuring BBK. This is where I come into play with Plotdigger. Ryan approached me to put out this release for him. I took this “film,” added the credits, mastered the discs, created the art and had the discs professionally replicated. After long delays with the replicator, I got the discs in hand and they began to ship. That film has since gone “out of print” and is no longer available. This is as close to a Gutterballs 2 film that anyone has seen so far for home release. During this time Ryan stated many times that his plan was to film some re-shoots on the “true” Gutterballs 2 with shooting supposedly happening in the beginning of 2017... then May of 2017... then later summer of 2017... all with a planned release date in September of 2017, on Ryan’s birthday. That day has come and gone and still, no release.

I had a personal falling out with Ryan, as did many other people within the horror scene who worked with him or were fans. Some of us are not sure why, or what happened. For me, I stated that I no longer wanted to be the “face” of his shipping and organization. I received some nasty messages thanks, in part, to things he was saying and doing on social media that angered a lot of people and although I stayed steadfast for a while, trying to right the Plotdigger ship and save his name, in the end I decided I’d rather focus on myself, my company and my next feature, so I explained that to him. It was, for some reason, a disastrous end to our working partnership and apparently our friendship.

There were other projects in the works that are now in even longer limbo (that perhaps will never see the light of day) that I was in the middle of working on when he severed ties. I was working on the artwork for a release (finally) of his film Big Fucking Monster. I was going to take the reins, master the discs and do essentially what I did for More Dead Nude Girls. When I got the “finished” movie from his editor, I was surprised to find it was not finished at all. Ryan was surprised as well, he said. With no time to completely edit a film in post-production, it was sent per Ryan’s request to a third party to complete editing. I never heard anything about it again. Too bad, because the artwork for the blu-ray is badass! The movie has been “in production” for upwards of 4 or 5 years if I’m not mistaken and at this point I’m assuming it is never going to get released.

If this all seems to anyone like a complaining session, it’s not. I harbor no ill will or feelings for Ryan Nicholson or Plotdigger Films. He has supported me and my films in the past and I desperately wanted to return the favor for a guy who was an idol in underground horror and terrific FX artist. I tried desperately to take his projects, get them back out there and deliver on the goods. Plotdigger has always been a company of big promises and long, long wait times. I think over the last couple years, it got a lot worse and maybe the projects were just too much to deliver. Ryan’s health issues didn’t help the situation either.

Indiegogo updates from February say Gutterballs 2 shooting in May and Gutterballs 3 filming immediately after, yet on social media Ryan has stated Gutterballs 3 was cancelled all together. At this point, I’ve personally considered all Plotdigger projects completely cancelled, and the hundreds of dollars I personally invested in the campaign I have given up on ever seeing any sort of product return. I fear that, unless Ryan hands over the reigns to Plotdigger Films and all of its random projects to someone else to manage, we’ll all be stuck with just the memories of some of his old fun cult flicks and a lot of hopes and tears about the present and future. But throughout all this, I’m desperately hoping for a resurgence. Missteps aside, we all want to see these movies get a release. Even though I may seem defeatist about it all, I’ve never stopped holding out hope. After all, I didn’t get the Plotdigger Films logo tattooed for nothing.